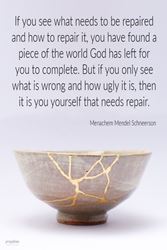 What do you do when it all gets too much?

Living in this volatile world of ours can be tough, often having an abrasive and at times shattering effect upon both our physical and mental resilience that allows us to exist within it.  I can’t imagine anyone who has not in some personal way, felt the effects of two years of pandemic, only to now be confronted with war in Ukraine, the spiralling costs of living and of course any other personal challenges closer to home, life at times can be very tough indeed. It’s no surprise then that we see the topics of wellbeing, mindfulness, and spirituality, gathering pace in both interest and importance to us as human beings, perhaps even on a par with that of our physical health. This holistic approach to feeling well, has also opened a dialogue that mentions a sense of ‘brokenness’ where either physically or mentally we are acutely aware of no longer being wholesome.

When this term brokenness is used, I cannot help but call to mind the words of Paul when he wrote to the Corinthians, “But we have this treasure in jars of clay to show that this all-surpassing power is from God and not from us”, We are of course the clay jars and God’s gifts are the treasure he places inside each of us, clay jars are known to be fragile, but God’s grace is not.

A beautiful example of healing from brokenness is that of Peter, head disciple and rock on which Jesus said he would build his church, though he too is a clay jar, one about to be broken by the events of Holy Week. The denial of Jesus three times must have been devastating for him, but the moment where you sense that he became completely broken is found here in verse 62 of Luke’s Gospel, ‘And immediately, while he was still speaking, the rooster crowed. 61 And the Lord turned and looked at Peter. And Peter remembered the saying of the Lord, how he had said to him, “Before the rooster crows today, you will deny me three times.” 62 And he went out and wept bitterly.’ That look from Jesus is what broke Peter, but it was of course not the end of their relationship, as Jesus returns to Peter following His resurrection and puts Peter back together again, no judgement of events passed, only healing love and purpose. Jesus restores Peter in a way that makes him even stronger and more valuable than he was before, a renewed resilience, forged from Peter’s experience of being broken and something from which Peter will draw immense strength when facing the challenges that lay ahead, something we are all capable of doing if we look to Jesus to heal us too.

In the course of life, still using the metaphor of us as clay jars, we will acquire all manner of visible fractures caused by our life experiences, cracks where perhaps we have been badly broken, stress lines where the pieces have been glued back together as we healed, though for some, those pieces never fit properly again, leaving others and even themselves, to notice only the imperfections of the jar and not the treasures contained within. This is how I would describe the effects of the stigma attached to mental illness, where something that was once viewed as strong in its completeness and valued for the gifts it contained, is now regarded as weaker, imperfect in appearance and somehow of less value because of it.

Our imperfections are who we are, it’s what makes us unique in the world, we should learn to accept them and perhaps others will too, use them as Peter did and become stronger for it, be kind to yourself and to others, even be the glue that helps put the pieces back in someone else’s jar, whilst always celebrating what already lies within.

Internet search engines are an amazing source of learning, where you can of course find what you are looking for, or as happened to me this week, come across something new, quite by chance. I was researching the topic of brokenness when the word ‘Kintsugi’ kept appearing, something I had never heard of but was so glad I now had. Kintsugi is an ancient Japanese art form, used for repairing broken things with gold, thereby making them more beautiful and even more valuable than when in their original form. Jars, pots, plates, cups and more, that had been broken by some event and probably for most of us, would have been discarded as worthless, were put back together with these beautiful veins of gold paste, which strangely highlighted the imperfections of the break, but in doing so caused you to admire it rather than reject it.

I think God is our very own form of Kintsugi, because when we feel that we are utterly broken in life, He never sees us as worthless, but instead, He will by faithfulness, put us back together again and again, piece by piece, using the gold paste that is the love of Christ and with a bond whose strength is found in the Holy Spirit, so that the clay jar is now more beautiful and valuable than ever before, even with all its imperfections on show for all to see, it is to be admired but never rejected.

When the righteous cry for help, the Lord hears

and rescues them from all their troubles

The Lord is near to the broken hearted,

and saves the crushed in spirit…

Circle me O Lord with your loving presence

Keep fear without and calm within

Keep fear without and hope within

Keep fear without and love within

This day and always