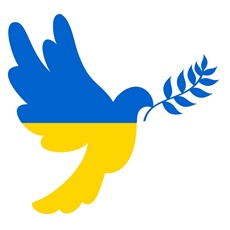 Thought for the Month April 2022

One of the great musical experiences I had this year (no, it wasn’t on a Tuesday!) was to watch the opera Boris Godunov by the (improbably forenamed) Modest Mussorgsky, relayed from the Metropolitan Opera, New York. First performed complete in 1872, it tells the story of Tsar Boris, who reigned Russia for seven years at the end of the 16th century.

One profoundly depressing aspect, doubtless intended by Mussorgsky, was how little had changed in 300 years. The state was ruled by a despot with almost limitless powers. He used his personal wealth and tax revenues to reward oligarchs, who themselves acquired great riches. Meanwhile, Russia was nothing less than a police state – the people were poor and powerless; they were punished mercilessly if they stepped out of line. The establishment of the Orthodox Church supported the régime, indifferent to the suffering of the people. The only news was government propaganda. On the western border, armies were amassing.

Power. Boris became Tsar desirous of doing good for his people. Yet he could not govern without the state terror apparatus already in position. He could not secure his position without the carrot and stick to reward his allies and take out his enemies. He loved his children, and wanted to pass on the tsardom to his son – and that meant clinging to power by all means possible. He is a profoundly unhappy man. Jesus talks about rendering to Caesar what is Caesar’s, to God what is God’s – making it clear that they are two different things.  He talks too about how difficult it is for a rich man to enter the Kingdom of Heaven. It is as if this man Boris feels, almost knows, he has cut himself off from grace by his life choices. Do you feel, as I am coming to do, that (tragically) he is right?

Forgiveness. Boris achieved power by countenancing, probably arranging, the murder of the child who is the true heir. The guilt of this haunts him through to his death. He wants to be forgiven, but cannot accept that God will show him mercy, firstly because of the heinousness of his crime, secondly because he continues to enjoy (if that is the right word) the fruits of it. He dies in mental agony. So what would you say to him? Is there any crime so terrible that it puts you beyond God’s mercy?

Truth. There is another character in the opera whose life is a kind of reverse mirror-image of  Boris’s – Pimen. After serving time as a soldier, killing, gourmandising, womanising, he turns aside from the world and devotes his final years to life as a monk. And what he does is to transcribe the history of his time onto manuscript – to tell the truth of it. In the Met production, this is presented unforgettably as an actual scroll that is both fragile and immensely strong. The truth will set you free, Jesus said; we often tend to think of this in terms of mystical truth, but here we are shown that the truth of it is literal. In this world of lies and disinformation, we can only make choices that have value if they are based upon the premises of truth. The Bible itself is fragile – we cannot even trace back Jesus’s words to what he actually said in his own language; and yet it is mighty. It is truth. Its truth will set you free.

The people in this opera are the victims of its power struggles and its corrupt society. Without power or wealth, dependent on the vicissitudes of nature for a good harvest to be able even to eat, disregarded, pushed around, they remind us of the origins of Christianity. It is a religion where the poor are to be exalted, the mighty put down from their exalted positions. In this period of Lent, when this Thought is being written, it is a reminder that we are called to live in the world, as if we have any choice, but to be not of the world, which is a matter of choice. Renunciation is not being nicer, or slimmer, or even better: it is putting out of the way everything in our lives and in our minds that puts any kind of barrier between us and God. And that is hard.

The opera closes with the song of the Holy Innocent:

Tears are flowing, tears of blood;

Soon the foe will come. The darkness nears.

I urge you to pray for the people of Ukraine. For the people of Russia. For those who despitefully use us and them. And for all suffering, powerless, dispossessed people in the world. For all those who feel that they are far from God and that he is far from them. For all who cannot pray and cannot repent. Amen.