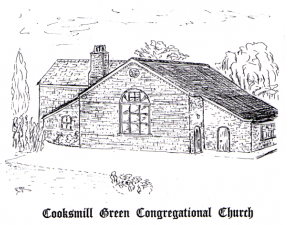 Cooksmill Green is a small hamlet in the Essex countryside, four miles to the west of Chelmsford near the villages of Roxwell, Highwood and Writtle.  The Congregational Church in Cooksmill Green, or as it is better known locally as ‘The Chapel’, has been the focal point of this Essex hamlet for over 150 years. Its origins can be traced back to the beginning of the 19th century when local travel was not a task to be undertaken lightly and the highlight of the week for many people living in rural villages was an open air service conducted by visitors from Chelmsford’s Congregational Church. This led to the establishment of ‘Meeting Houses’ in many of these villages so that local services could be enjoyed in comparative comfort with protection from the elements.In 1865 a piece of freehold land was acquired in Cooksmill Green by members and trustees of New London Street Chapel, Chelmsford. The ½ acre site was purchased for £29–11-00 (twenty-nine pounds eleven shillings) and work commenced on the construction of the Congregational Chapel, Chapel House and Stable. A few months later ‘The Roxwell Meeting House’ was completed. (Cooksmill Green being in the parish of Roxwell). 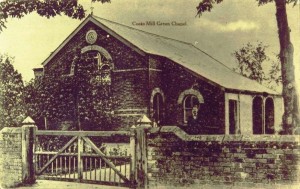 At 3.00pm on Sunday 7th April 1867 Cooksmill Green Chapel was opened with a Mr Wilkinson from New London Road Chelmsford, leading the worship and preaching the opening sermon. Since 1867 the original building has remained almost unchanged.

The stable on the north side of the Meeting House was rebuilt in 1929 and on 11th September 1929 the schoolroom/recreation room was opened by Rev. H. Wallace Simm the Chairman of the Essex Congregational Union..

In 1962 an additional strip of land next to the church was purchased for the sum of £25.

Refurbishments to the interior of the church have included a match board ceiling (to replace the original plaster which deteriorated through the continued use of oil lamps and coal burning stoves) new floors and handmade window frames which were installed in the 1990’s. The wrought iron light fittings were obtained from a company of craftsmen in Austria who specialize in the use of re-cycled metal from old railway tracks. 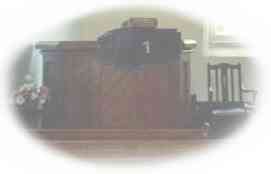 The pulpit at Cooksmill Green once formed part of a small church at Tylers Green near Ongar and is known to have been used by the 19th century missionary and explorer David Livingstone whilst he was training for the ministry.

On the formation of the United Reformed Church in 1981 Cooksmill Green Church became an Unaffiliated Congregational Church, the trustees being selected from the church membership. 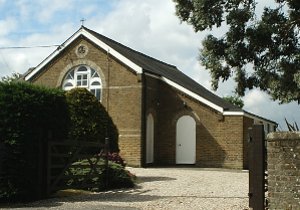 Today the church has around 30-40 active members as well as many associate members, friends and supporters. Services are held every Sunday as well as other church events throughout the year, as the church has no resident minister it is blessed with the support of many visiting clergy and speakers.

Cooksmill’s members and congregation play an extremely active role in the local community. The church has a number of talented musicians and its 40 strong choir ‘The People of the Green’ performs in the church and at events and concerts throughout the year in aid of various charities.

United services are held with the churches of Roxwell, Highwood and Writtle, whilst Cooksmill Green Church and Garden ‘Open Days’ attract many visitors from far and wide.

Cooksmill has a small but dedicated group of younger members who play a vital role in the present and future life of the church.