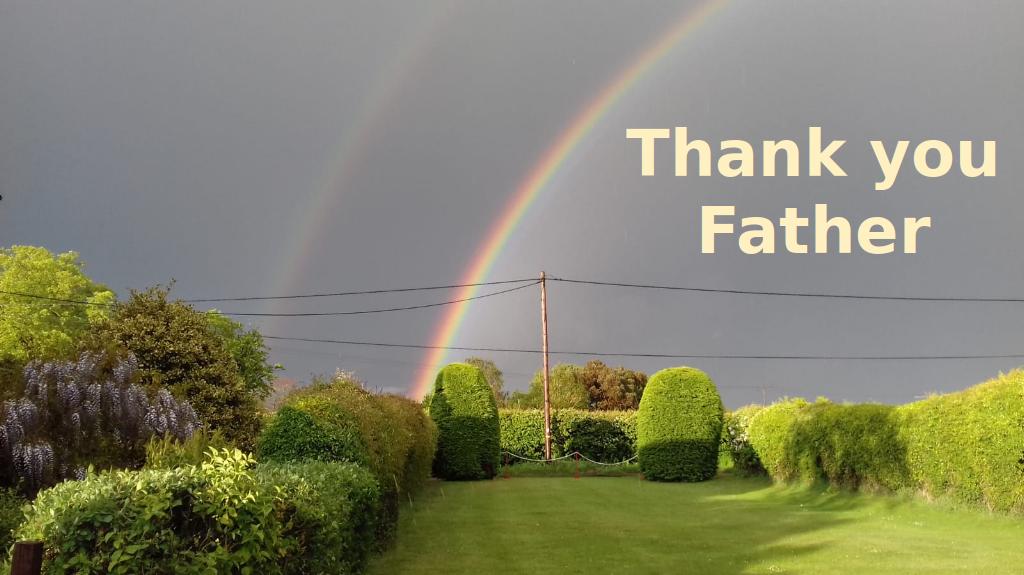 Did anyone see the beautiful double rainbow last week? I don’t know about you but when I see a rainbow I always think of Noah and how God sent his rainbow as a covenant to his people, a sign of hope. Then I thought, like us, Noah was in lockdown too. Then giving it some more thought I realized that we have escaped lightly, just think of being in Lockdown with all those animals! (I digress).

I was thinking how prominent they are at the moment, rainbows, not animals. I have noticed an increase in bird life and birdsong, is it just that there are less people around to bother them and much less noise so we can actually hear them? Steve and I, when out walking, saw a peregrine falcon sitting on the corner of a goal post on the recreation park, absolutely majestic!

We see rainbows painted on billboards and road hoardings, children have painted them and put them up in their front windows as a sign of hope to cheer people up as they pass by. Putting these colorful rainbows in our window is a positive thing we can do. I’ve been heartened by so many of our fellow humans, supporting each other by giving emotional and practical assistance, gardening, phoning the vulnerable, ordering and delivering food to those in need.

This week’s bible reading is about Saint Stephen (Acts 6-7), although the church was rapidly growing in Jerusalem, there were still the usual petty squabbles. The church apparently had an organized charity, similar to a daily “soup kitchen” for the needy.  The Hellenist widows, (Jews that had lived most of their life in Greece but returned to Jerusalem) complained they were being neglected by the unfair distribution of food. They felt they were being discriminated against and it began to cause problems within the Jewish and Christian communities. The apostles knew they had to act, so they picked Stephen to take control and head this up. Like our volunteers today, Stephen was giving practical help to make sure the people were given the food they needed and that it was distributed fairly. The apostles had to get the right man for the job and were looking for a man of good reputation.

According to Luke Stephen was “a man full of faith and the Holy Spirit” (Acts 6:5) he did his job well and was highly thought of by the people. So why did things change dramatically and why was he put to death by stoning? One of the reasons I imagine, was the success he had in teaching the truth of Jesus Christ as he went about his work teaching both Christians and Jews alike, performing miracles to confirm his message. As more Jews converted to Christianity, it was always going to come to the attention of the Jewish leaders, the Sanhedrin, who tried to quash this by refuting Stephens teaching. They tried to do this by using their scriptures, but to no avail. So they found false witnesses, probably offering them money in return for lying for them. They falsely accused Stephen of blasphemy against Moses, God and the law, stirring the people up to give false witness and to spread lies throughout Jerusalem and as the old saying goes “mud sticks”! Sewing in the majority of the people minds, the notion that Stephen was a blasphemer. Those witnesses closed their ears to the truth and joined the crowds picking up stones and throwing them at Stephen. Those who stood and watched were just as guilty.

Stephen could have kept quiet and organized the distribution of foods from the safety of his home but didn’t, and was killed for using this opportunity to go out and tell of the truth of Jesus Christ. He was only 35 when he was dragged through the streets and killed, and as he was dying he prayed to God to forgive his persecutors, remind you of anyone?

We are all called to be evangelists and spread the word of God which we all endeavor to do in one way or another, but how many of us would leave the safety of our homes, like Stephen, and go out and preach with gusto the word of God to hostile groups. Imagine Standing on street corners preaching and praying aloud. I think some of our friends would think we had gone crazy! But I don’t think this is what most of us need to do, God made us all individuals, some braver than others, some more faithful than others, some quieter than others, didn’t Jesus say “go into your room and pray to your father in secret and your father who sees in secret will reward you” (Matthew 6:6). Stephen was a brave and devout Christian, loved by the Lord and this was his calling.

I am open about my faith but feel I lack the knowledge and confidence to go out alone and tell of Jesus teachings in case I get asked awkward questions I’m unable to answer. I am no theologian and lack the wisdom and articulation Stephen had, but we should take comfort in the knowledge that no matter what sort of character we have, evangelistic or otherwise, God knows us individually and that we spread his truth in our ways, most importantly that we are loved and guided by him.

If anyone had said to me last Christmas that I wouldn’t be able to hug my Grandchildren for over 50 days I wouldn’t have believed them. But look to the rainbows that we see everywhere, they make us smile, they are a sign of hope and remind us to keep faith in the knowledge that we will hug our family and friends again, we will be able to have picnics, we will be able to sing again, worship in our own churches and go out in our own indomitable way to spread the love and good news. We also know as fact and can be wholly assured, that we will always have the love and protection of our most blessed Lord!

Lord Jesus Christ you taught us to love our neighbour and to care for those in need.

Let us remember, help and pray for all those who are worried or feel isolated from those that love them

Forgive us our pride and give us also the grace to accept help, sometimes it is easier to give help than to accept it.

We pray for all those that have lost loved ones whether through Coronavirus or through other natural causes.

As we look to the easing of the lockdown, give our ministers and scientists the knowledge to do so in the right manner, give them your wisdom and guidance in what must be an extremely difficult task.

Lord as we see all the rainbows around us, let us remember your covenant as a sign of hope to your people and pray that sometime soon we all can resume our daily lives. Perhaps changed in some way but ever thankful that you remain at our side, now and forever.