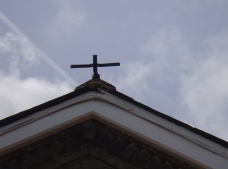 Thought for the month February 2022

I am a fair-weather cyclist. I hate getting wet. So I always look at all the weather apps to gauge the probability of rain. And then I take the most favourable. You can guess how many times I come home drenched.

I wonder if we sometimes read the Bible in the same way. Take the Old Testament lesson for the first week in February. It is a vision of heaven so glorious that we still use its words in the communion service, and still echo them in that favourite hymn “I the Lord of sea and sky”. In the book of the prophet Isaiah, it is preceded by the lovely image of God’s people as his vineyard, one that Jesus will use later; it is followed by those passages well known from the Christmas story, about the people walking in darkness having seen a great light, about a virgin conceiving a child. Messages of hope.

Then read the bits in between and you get a rather different picture.

God’s message to his people, that he charges Isaiah to deliver, is not a little bit of fine tuning. It’s the kind of heavy parental sarcasm I well remember my mum using to me. “If you think that’s a good idea, just carry on as you are doing. I don’t know why I waste my breath. I’ve said my piece. You’ll see.” It speaks of love and concern, but also of a despairing end of patience. Did I listen to my mum? You can guess. Isaiah prophesises what the result of the nation’s patterns of behaviour will be: conflict; war; destruction; moral bankruptcy; devastation of the natural landscape.

Isaiah identifies the false values of the nation that will inevitably lead to this outcome unless renounced. The ones that top the list are these: pride, arrogance and complacency; wilful blindness and thoughtlessness; greed and corruption. Do any of these ring true about our present world? Do I need to ask this question?

Perhaps the most interesting thing about the Old Testament reading is the opening: “In the year that King Uzziah died…” I had never given it much consideration until I came to do this Thought. Uzziah was not some obscure OT name. He reigned for fifty-two years – not quite as long as our present Queen or Queen Victoria, but long enough for the vast majority of people to have known no other monarch, and never to have experienced a Royal Coronation. His death was a significant time for everyone. And I imagine that when he died, people will have looked back over the changes that took place during his reign and their national achievements (it was a time of relative stability for the nation); they will have looked forward to building upon these foundations.

Actually, the reign of Uzziah was followed by national catastrophe – military defeat, the destruction of Jerusalem, the exile of almost all the people as slaves to Babylon.

Following the reign of Victoria, people looked forward to an era of further prosperity born of economic well-being, scientific advance and the might of the British Empire. Wider still and wider shall thy bounds be set… Unfortunately, Germany had different ideas.

I am not saying that the reign of Elizabeth will be followed by similar disasters, but the message of Isaiah is that if you disregard what is wrong with the nation and fail to do anything about it, there is a price that will be paid.

While the New Testament focuses on answers to the question “What must I do to be saved?”, it is often refreshing to turn back to the Old, which focuses more on the wider question “What does the nation have to do to be right with God?” Isaiah makes it clear that the covenant between God and Israel is not the last word in what his people have to do, but a starting point. The exploration of what more needs to be done comes up again and again in the history of God and Israel: in other words, it is no good being circumcised and laying off the pork scratchings if everything else in your behaviour is wrong. Similarly, if all we as Christians are doing to be right with God is going to church on a Sunday, meeting our friends, hymn-singing followed by coffee, then we need to turn our sight outwards upon the wider world.

This part of Isaiah suggests (amongst others) three things that we could and should be doing today.

Firstly, the military defeat and exile of God’s people were caused by bad foreign policy decisions. We need as Christians to make our voice heard in those taken by our leaders.

Secondly, the established church, with its Chief Priests, High Priests and all the rest of the hierarchy  in the time of Isaiah (and in that of Jesus) was absolutely useless at providing guidance to the nation. No wonder people turned to outsiders, to prophets such as John the Baptist. In the week that I am writing this, the front pages are full of the threat from Russia to Ukraine and, beyond that, to the West as a whole. I found three references to the Church in today’s paper: that the Church was thinking of allowing more comfortable seating in church; that £1m was being allocated to settle a dispute between an Oxford college and its dean; and that Stephen Cottrell, Archbishop of York (and formerly Chelmsford),  is advocating a new method of voting for the Archbishop of Canterbury. Given such dearth of genuine leadership, it is up to us as Christians to make our voices to be heard on the moral questions of the day.

Finally, as Christians we need to look beyond the present day and its concerns to plan for the future, for where we want our nation, our churches, our world to be in five, ten, one hundred years’ time. In doing so we start to think like God, and in doing what is necessary to bring this about I would say, echoing Isaiah, that we do what God wants and requires of us.

“Holy, holy, holy is the Lord of hosts;

the whole earth is full of his glory!”

And the foundations of the thresholds shook at the voice of him who called, and the house was filled with smoke.  And I said: “Woe is me! For I am lost; for I am a man of unclean lips, and I dwell in the midst of a people of unclean lips; for my eyes have seen the King, the Lord of hosts!”

Then one of the seraphim flew to me, having in his hand a burning coal that he had taken with tongs from the altar.  And he touched my mouth and said: “Behold, this has touched your lips; your guilt is taken away, and your sin atoned for.

And I heard the voice of the Lord saying, “Whom shall I send, and who will go for us?” Then I said, “Here am I! Send me.”

” ‘Keep on hearing, but do not understand;

keep on seeing, but do not perceive.’

Make the heart of this people dull, and their ears heavy, and blind their eyes;

“Until cities lie waste without inhabitant, and houses without people,

and the land is a desolate waste,

and the Lord removes people far away,

and the forsaken places are many in the midst of the land.

And though a tenth remain in it,

it will be burned again,

whose stump remains when it is felled.”

The holy seed is its stump.