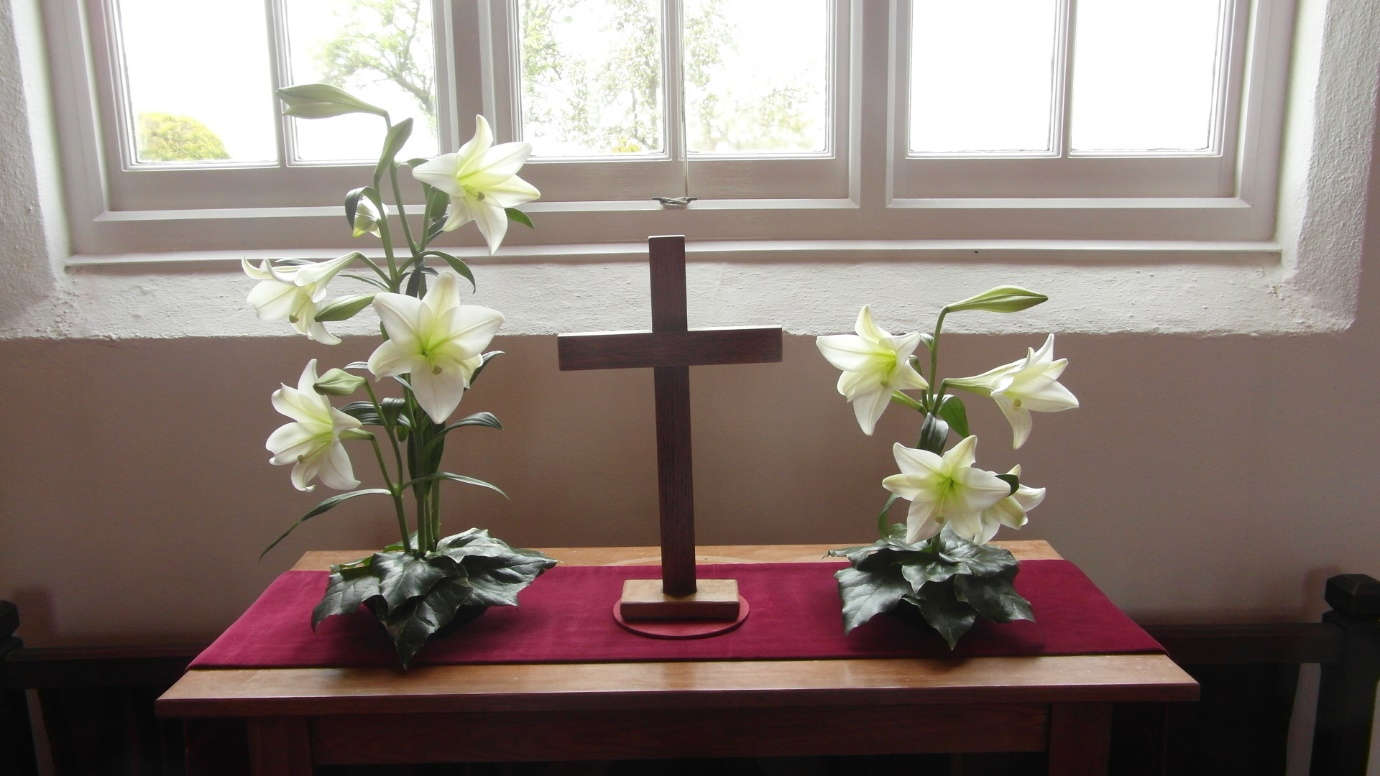 *This is the first day of God’s new week.
The darkness has gone, and the sun is shining
And a HAPPY and BLESSED Easter to Everyone.

The Resurrection of Jesus

20 Early on the first day of the week, while it was still dark, Mary Magdalene came to the tomb and saw that the stone had been removed from the tomb. 2 So she ran and went to Simon Peter and the other disciple, the one whom Jesus loved, and said to them, “They have taken the Lord out of the tomb, and we do not know where they have laid him.” 3 Then Peter and the other disciple set out and went toward the tomb. 4 The two were running together, but the other disciple outran Peter and reached the tomb first. 5 He bent down to look in and saw the linen wrappings lying there, but he did not go in. 6 Then Simon Peter came, following him, and went into the tomb. He saw the linen wrappings lying there, 7 and the cloth that had been on Jesus’ head, not lying with the linen wrappings but rolled up in a place by itself. 8 Then the other disciple, who reached the tomb first, also went in, and he saw and believed; 9 for as yet they did not understand the scripture, that he must rise from the dead. 10 Then the disciples returned to their homes.

As I write these thoughts, I’m sitting outside in our garden in the middle of the Moulsham Lodge Housing Estate. From my seat on the patio I have a view of the most magnificent blossom on a tree in the corner of our garden, the sun is shining and it’s almost as if time has stood still.

11 But Mary stood weeping outside the tomb. As she wept, she bent over to look into the tomb; 12 and she saw two angels in white, sitting where the body of Jesus had been lying, one at the head and the other at the feet. 13 They said to her, “Woman, why are you weeping?” She said to them, “They have taken away my Lord, and I do not know where they have laid him.” 14 When she had said this, she turned around and saw Jesus standing there, but she did not know that it was Jesus. 15 Jesus said to her, “Woman, why are you weeping? Whom are you looking for?” Supposing him to be the gardener, she said to him, “Sir, if you have carried him away, tell me where you have laid him, and I will take him away.” 16 Jesus said to her, “Mary!” She turned and said to him in Hebrew,[b] “Rabbouni!” (which means Teacher).

I wonder too, if time stood still for Mary as she stood weeping at the tomb.

In any event, very soon time would quickly start again for Mary and the disciples. The readings above speak for themselves and don’t need repeating in different words by me. The key is, Jesus had risen!

Some people will point out that Jesus was not the first – Jesus after all raised Lazarus from the dead – but that wasn’t the same. Lazarus was brought back to his old life and would die again. Jesus on the other hand was resurrected to a New Life and is with us still.

On Friday we thought about the unprecedented times we’re in and the sacrifice of those who are on the front line, keeping us safe and well. About how we might respond to both their sacrifice – and to Jesus’ sacrifice on the cross.

We thought too about how these times are a wakeup call and that right now we have the opportunity to be part of a ‘New Reality’. This could be the moment when the world becomes part of a New Creation started on that first Easter Sunday over 2000 year ago. It’s up to us to help make the sacrifice of 2000 years, and the sacrifices being made today, really mean something and not, as I hinted Friday, be consigned a chapter in the history books. We must respond, to both.

We could be forgiven for thinking that the darkness is still here – and that is painfully true for many – but the seeds of New creation are there if we care to look for them. They are, of course, visible in the blossoms on the trees, the blooming of the flowers, bird song and the sunshine. But they’re also visible in the love, kindness and compassion that is being shown by people in these difficult times, not just to people they know, but to complete strangers as well.

I hope and pray that as you look around you today you’ll be able to find evidence of New Life, that you’ll feel hope, that you’ll draw strength and joy from what you see. Yes we still face difficult times – but there is a future – with trust in God and with His help, that future will be bright and beautiful.

God Bless everyone on this special day.

For many years now we have concluded our Easter Sunday worship with the wonderful Hymn ‘Thine be The Glory’ so before we have a final prayer here are the words, which we can all sing out loud, or in our hearts and look forward to the day when we sing them together again.

Thine be the Glory

Thine be the glory, risen, conquering Son,
Endless is the victory thou o’er death hast won;
Angels in bright raiment rolled the stone away,
Kept the folded grave-clothes where thy body lay.

Lo, Jesus meets us risen from the tomb;
Lovingly he greets us, scatters fear and gloom;
Let the Church with gladness hymns of triumph sing,
For her Lord now liveth, death hath lost its sting.

No more we doubt thee, glorious Prince of life;
Life is naught without thee: Aid us in our strife;
Make us more than conquerors through thy deathless love;
Bring us safe through Jordan to thy home above:

Heavenly Father
We thank you and Praise you
For all that happened on that first Easter weekend
All that it still means to the world today.
Help us to respond and become
Part of your New Creation
We pray for those who are struggling
To see the new life around them.
Those blinded by fear, loneliness, pain, loss.
Illness, or any other suffering.
May their eyes be opened to a new hope,
A new hope in You.
Bless again we pray all those who are
Sacrificing so much in our world today.
And finally Lord, give us all
Hope, strength, courage and patience
Until we can be together again with
All our loved ones – family and friends.
In Jesus’ name we pray.