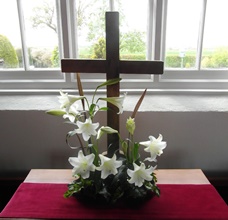 On the day that Steve rang me to ask me to do this “thought”, we had five scam phone calls, and two emails promising me untold wealth if I seized the investment opportunity offered. The only defence against this blight on modern life is to be doubtingly suspicious, displaying what is usually called “healthy” scepticism. So I am not inclined to feel superior to St. Thomas in today’s Gospel story – I can understand him wanting to be pretty certain before committing the rest of his life to someone he had recently seen executed. There is a tendency for some people in some churches to read this and the stories of other backsliders in the Bible as an opportunity for self-satisfaction, believing they would never act in that way, secure in the knowledge that they are not likely to be put to the test. But there is much more to this part of the Bible narrative than the Doubting Thomas bit that preachers usually pounce upon.

This Sunday, called by some Low Sunday, is traditionally the day when many churches have their AGM. It is fascinating in the light of this to read what the set lessons for today have to say about the Church. Because, after only a week after Jesus’s crucifixion and resurrection, already a Church is coming into being. The lesson from the Acts of the Apostles tells us what we would want to hear about the early Church – that it was supportive, sharing, united. The Gospel though tells us that it began, like one or two other Parochial Church Council meetings, with an almighty row – Thomas refusing to accept what everyone else told him about the appearance of Jesus, and quite clearly a disagreement that rumbled on for another week afterwards. This row though focuses on something fundamental about our belief that echoes through to today. Jesus Christ is risen from the dead; his body burst its three-day prison; he is triumphant over sin and death. But what now? That is not the end – it is only the glorious beginning. Jesus in this meeting with the disciples makes it clear that it is not to be business as usual and he will not be there to lead them in person. His very appearance was mysterious: Thomas was able to touch his wounds, but he was able to join a secret meeting behind a locked door. This mystery – Jesus as human being and as Godhead – is beyond the understanding we have as human beings to explain in logic. So the first message I think we have to take from this Gospel is that the Church is called not to be a self-help group, not alumni, not  ladies and gentlemen who lunch.  We begin with the resurrection of Jesus and move to how that – almost incredible – fact means our lives have to be different. We have to be a Church of Faith.

The second disturbing fact is what Jesus tells the disciples. They have met in secret “for fear of the Jews”. You can imagine what that means – “we got the ringleader, so now let’s mop up the remnants. You guys are next.” Jesus tells them – and us – that they cannot carry on this way. They are sent out – literally, out from behind those closed doors – to be in the world what Jesus has been. Whatever the cost. The Church must be open, not hidden away in secret. The Church must have the courage of its convictions.

The third thing – sorry about this, gentle readers, here comes my hobby-horse again… It is absolutely extraordinary, considering all the things they have to talk about, all the problems they face, that the first PCC meeting focuses on…sin, something that the Epistle reading also has a lot to say about. Jesus confers upon the disciples the right to forgive people their sins and pronounce absolution – something that even today only an ordained priest can do. Interestingly, he also gives them the power to withhold absolution: “if you retain the sins of any, they are retained”. But to withhold absolution, as John’s Epistle makes plain, is to place the sinner outside the truth and mercy of God. This is a power that has been used, thankfully, very sparingly – in the whole of the twentieth-century, only a handful of people were excommunicated – not Hitler nor Stalin – and then mainly for technical offences in respect of defying the Pope’s ultimate ecclesiastical authority. The message here is quite plain: we each have the individual responsibility to eliminate sin from our selves; it is not enough to think that our belief that Christ conquered sin absolves us from the individual need to do anything about it. And, in this era of blame and victimhood, the Church should be about forgiveness, not vilification.

So, three challenges. But reading the lessons set for today again, the mood is upbeat. The disciples rejoice to see Jesus. He wishes them peace and breathes the Holy Spirit upon them. He blesses all of us who will not see Jesus in the flesh but who believe. John mentions the word “fellowship” four times – we have fellowship with those who witnessed Jesus in the flesh; with God and with Jesus himself; and with each other. We are called upon, in those two metaphors that resonate throughout the Bible, Old and New Testaments, again and again, to “walk in the light”. Sometimes we have to sit and tease out what that means, particularly when life itself is full of trouble. But sometimes, as in the glorious words of John’s Epistle, we can simply bask in the radiance of that life which has been revealed to us, that truth that was there from the beginning of time, that place here and now and beyond us where there is not darkness nor ever will be. So, like St. John, I write these things full of hope and assuredness you will find that in Jesus, our Messiah, our joy this Easter will be made complete.

We thank you for the realities of Easter

Which we continue to celebrate today,

Realities that make such a difference to life –

The victory of good over evil,

Love over hate, life over death;

The turning of weakness into strength,

Fear into courage, doubt into faith;

A new beginning where it seemed like the end,

New hope where there had seemed despair

New confidence where there had been confusion.

Teach us to live each day as your Easter people. Amen.

There will be no Church Meeting in APRIL